Dips & Salads:
Dips are up 1.5% as private label leads with a 26.4% share. Flavored spreads, led by Sabra, jump 16.2%.
Supermarket dollar sales of refrigerated dips rose 1.5% to $112.6 million in the 12 weeks ended Dec. 28, according to Information Resources, Inc. (IRI), the Chicago-based market research firm. Units were down by 5.2%, but package sizes got a little bigger — volume was off by only 4.2%.
Private label posted a 22.6% gain on a unit increase of 8.0%, indicating a strong hike in per-unit pricing. But those pack sizes were also somewhat larger, since volume was up by 12.9% — a little more than the unit increase. Price per unit averaged $2.54 for both private label and the category as a whole.

Hummus Still Golden
The refrigerated flavored spreads category — dominated by hummus — saw dollars rise by 16.2% to $57.8 million, as units grew by 8.8% and volume climbed by 12.5%. Only 28.0% of category dollar sales were accompanied by merchandising support, down slightly from last year. Vendors say price cuts haven’t been necessary to move product.
Category leader Sabra saw its dollars rise by 51.6% with units practically in lockstep, up by 50.1%. Double-digit dollar gains were also posted by Cedar’s Mediterranean, private label, Garden Fresh and T. Marzetti.
John McGuckin, exec vp of sales for Astoria, N.Y.-based Sabra – Go Mediterranean (718-932-9000), says base volume continues to drive his business. “It’s not promoted volume, or price reduction volume, so the category remains vital and profitable for the retailer,” he notes.
With Sabra now at 62% ACV (vs. 68% ACV for the hummus category as a whole), McGuckin says he sees room for growth. The product is positioned well in the health and wellness segment, he explains, adding that some of the new users are those who are switching from high-fat dips and spreads such as sour cream.
The category responds robustly to promotion, but there can be too much of a good thing, McGuckin notes. Sabra’s Super Bowl promotional tie-in with Stacy’s chips produced “incredible” lift, he says, and he encourages retailers to promote chips and hummus together. But he cautions that having extra space available via a secondary display or endcap is essential to avoid out-of-stocks and leaving money on the table as a result.
Dominick Frocione, vp of sales for Cedar’s Mediterranean Foods Inc. (978-372-8010), Ward Hill, Mass., says that “We have the luxury of being able to customize a strategy for each retailer and often think outside the box to get that first initial trial. We like to employ ideas like bonus cups (such as 12 ounces for the price of 8 ounces), BOGOs, or even ‘get a free Pita Chip with purchase of one of our hummus items,” he says.

Space Needed
Frocione points out that “The biggest challenge we all face is finding space to merchandise our products. In order to build a category you need to give it space to be discovered.”

Vendors report strong sales, with pockets of real price sensitivity. “It is almost like the price point means more to them (consumers) than what’s in the cup, whereas for so long, people were willing to trade up a little bit,” reports John McGeough, vp sales and marketing for Lantana, Fla.-based Neco Foods, LLC (561-582-6089), which recently acquired the Atlantis Foods brand. “It comes down to, ‘Do we have enough of price point, of traditional products, out there?’ That has sidetracked us a bit — we do all of that — but we pride ourselves on making things that are different.”

Observers say sampling is especially important in prepared salads, dips and spreads. Brenda Donahe, director of sales and marketing for Albert Lea, Minn.-based salad maker Mrs. Gerry’s Kitchen Inc. (800-642-9662), notes that promotions needn’t push just low-end products, but a mix of different tiers and price points to give shoppers more options. She adds that “Seafood salads can be sold in the seafood department, and it would be great to do our steakhouse potato salad with grilling items. Some of dips could be sold in the produce section, too.”

Randy Bartter, vp of marketing for Ventura Foods, LLC (714-257-3700), the Brea, Calif.-based manufacturer of the Dean’s brand of dips, agrees that stressed-out shoppers often need guidance. “Shoppers may need to be reminded to visit the dairy case after picking up their favorite crunchy snacks,” he says.

According to Bartter, on-package information is another way to generate purchases. Showcasing usage occasions and recipe ideas with refrigerated dairy dips is another way to increase sales, he notes.
Different package formats also can generate excitement. According to Schaffer, Tribe’s two-ounce pre-portioned hummus has found some interesting niches, through vending machines and schools. “We also found another use for warehouse clubs, where we put it in a package of sixteen,” he reports.
Beyond the point of sale, product development also works to keep things fresh, so to speak. Many manufacturers, despite the economic climate, report that they are working on new offerings.
For example, Sabra has recently added 17-ounce packages along with its original 10-ounce size, and introduced Sun Dried Tomato and Chipotle varieties. Cedar’s Mediterranean is adding a new Tzatziki line of dips made with authentic Greek strained yogurt. Recently, the company debuted new grain salads and an edamame salad.

Mrs. Gerry’s is revamping its packaging and introducing new salads this year, including a Cowboy Caviar with beans, corns and peppers. And Sea Gold Seafood Products (508-993-3060), New Bedford, Mass., is working on an ambrosia salad.

Room for Growth
There appears to be plenty of room for both private label and national brands. ”Our branded presence continues to grow rapidly, but I see that retailers are striving to build their own brand image by sourcing great tasting healthy items in upscale packaging,” reports Frocione.

Finally, in a deepening recession, pricing remains a strong driver. Sea Gold is planning up to eight promotions this year, says Mike Tazeraias, president and CEO. “When people see a deal, they jump right on it,” he says. And Neco’s McGeough adds that retailers are increasingly eager for promotions to help move products. 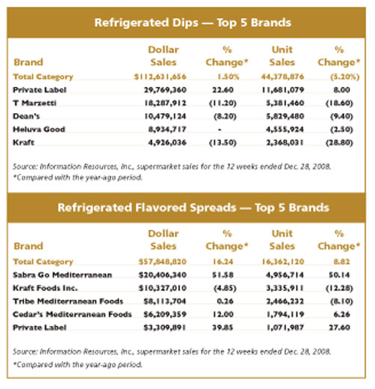