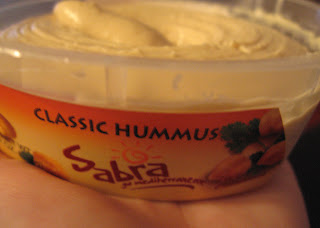 You are so creamy and delicious. The extra dollar I pay for you is well worth it. And so many varieties! Greek Olive, Tahini, Roasted Pine Nut, and - oh my god - Supremely Spicy. Thank you so much for existing.

I emailed Sabra on Saturday, when I originally posted this, and got a reply today.

Thank you for emailing Sabra Dipping Company. We are glad that you are enjoying our products and I have forward your information to our Technology Department.

Posted by Thanks for Reading! at 6:03 PM No comments:

Hummus isn't hard to find these days. Its on restaurant menus and easily found in the supermarket. That should be a good thing, but its not if what you're buying isn't really hummus. The reason I ask is because I recently ordered hummus in a restaurant and was served a delightful white bean dip. Was I happy? No, I was not. Even though it was yummy, it wasn't hummus. Hummus is strictly made with chickpeas.

I spent this past summer in Israel which could also be called hummus land. The creamy garbanzo bean spread is everywhere. They have like a whole aisle of it in the supermarket and I was once asked if I wanted it on my hotdog! Its the Israeli version of our ketchup. Anyways, since returning home I've noticed that the hummus here doesn't taste right. On further inspection I've found the culprit. It's the ingredients, or rather lack of ingredients. Hummus should be made with chickpeas (garbanzo beans), tahini, garlic, and lemon juice. If the hummus you're buying doesn't list tahini, (a paste made of sesame seeds) then your loosing out on a vital ingredient. When I make hummus myself I have really noticed that the quantity of tahini is really what makes an authentic tasting hummus.

Another ingredient to look out for is oil. Oil is found in a lot of commercial hummus, but real hummus does not use oil to bind the ingredients. You might see olive oil near the end of the ingredients and thats fine. When Hummus is served in the middle east, the top is usually hollowed in a little and olive oil is drizzled on top. Often times herbs like parsley or paprika will be added as a garnish.

Since returning to the states I've taken to making my own hummus because I've found that it is the closest to the Israeli Hummus I've grown accustomed to. When I lived in Jerusalem I used to walk to Mahane Yehuda, a crazy busy outdoor market and buy freshly made Hummus from a family that has been making hummus for who knows how long. Its hard to replicate that taste, but I've created my hummus recipe after trying and reading a number of different authentic ones. I'll post my recipe later in the post. However, if you aren't up for the task of soaking chickpeas overnight and shelling them. There are a couple of brands easily found in stores that I recommend.

1. Sabra Hummus
Its delicious and is an Israeli company. An interesting piece of trivia is the the word Sabra is another name for a person born in Israel. I love Sabra Hummus because it tastes authentic and I'm pretty sure it is sold in Israeli supermarkets under another name. A great thing about Sabra is that it has olive oil and other goodies on the top.

2. Trader Joe's Mediterranean Creamy Smooth Hummus
It comes in a larger size then the other Trader Joe's hummus and I think it tastes way better. It also has some pinenuts and olive oil on top. (I'm actually eating some as I type this.)

If you do plan on making your own hummus I highly recommend using dried chickpeas over canned. They can be found at your local supermarket usually in the Mexican or Middle Eastern section. Using dried chickpeas is admittedly some extra work, but the difference in flavor and texture is huge and its well worth the effort. Also make sure you have tahini/ tahina. it can be found in a can or bottle in Middle Eastern markets or sometimes in the Kosher/ Jewish section of your local supermarket.
Posted by Thanks for reading at 11:13 AM No comments:

Sabra, a hummus brand partially owned by Frito-Lay, is launching its first national ad campaign this month, an effort that beckons consumers to enjoy a taste of the Mediterranean without leaving home.

The TV, print and online campaign is also the first from New York agency StrawberryFrog. The campaign aims to acknowledge the clichés of traditional food advertising but subvert them by taking an unexpected direction.

A TV ad, for instance, shows a middle-aged couple sampling the hummus along with some wine as they observe a sunset. "It's like our own Mediterranean vacation," says the father. A second later, an object comes crashing through a window behind them and it is made clear that they are at home and their teenage son is throwing a party. "I thought you said your parents were in the Mediterranean," one partygoer then mutters under his breath to the boy.

With growth of more than 50 percent last year, the Astoria, New York-based brand, which is also co-owned by the Strauss Group, hopes to ride the eat-at-home trend and a movement by U.S. consumers towards more exotic foods. "We hope to spark a movement through this campaign inspiring consumers to experience the world through the sounds, cultures and foods of the world right in their own homes," said Rodrigo Troni, CMO of Sabra Dipping Co., in a written statement.

Frito-Lay, a unit of PepsiCo, formed a joint venture with the Strauss Group in 2007, as Frito-Lay attempted to expand its portfolio of healthier snack foods. Hummus is said to use "healthier oils" than most snacks and contains no trans fats.
Posted by Thanks for Reading! at 6:07 AM No comments: