Tribe vs. Sabra Hummus!
Yesterday afternoon I ended up eating both snacks I had. I guess chewing gum did not make a huge difference in how much I ate. I had an apple and a Quaker True Delight Bar with some Peach Ginger Green Tea. I was not even hungry but knew I needed some fuel before the gym.

It was not quite ready yet when I got home so I decided to snack on some hummus! Pam from Tribe Hummus was kind enough to send me a coupon for a free container so I got Roasted Red Pepper to try!

I still had some Sabra Roasted Red Pepper left so I decided to compare the two! 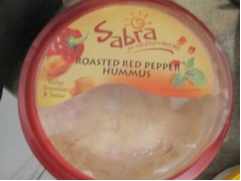 The Tribe was much darker in color. It had tiny chunks of red peppers throughout the hummus.

The Sabra comes with a big pile of roasted red peppers on top of the hummus. I usually mix them right in as soon as I open the container. It seems to contain a lot more peppers than Tribe.

I decided to try the both flavors on cucumbers to compare the taste. First was Tribe.

At first I was not too thrilled with the flavor. It had a weird, artificial taste but seemed to get a little better after each scoop I took.
Next I tried Sabra.
I already knew I was in love with Sabra from the start but wanted to see how it compared. It had a much better flavor to me. It tasted more natural and was also much creamier in texture. The boy also agreed with me that Sabra was much better.
I compared the nutrition facts next.

Tribe wins in the nutritional department since it has 30 less calories, 3.5 fewer grams of fat, and a shorter ingredient list. I would honestly still prefer Sabra since it tastes so much better and is much creamier! They are both wonderful brands and go great on sandwiches, chips, and veggies! I can never have too much hummus :)
Posted by Renee K at 7:48 AM