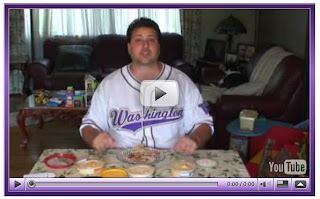 I risk life and limb to bring this taste test to my adoring fans that is how far I am willing to go for my swelling viewer base! Wait that is my waist swelling… Anyway I taste test three hummus makers today including one that had a federal recall “The products could contain a bacteria that could sicken healthy people and also cause serious and sometimes fatal illness in infants, the elderly and those with weakened immune systems, said an F.D.A. spokesman” I fit all three of those risk groups! Ok so the recall was in 1997 but still I was willing to take a chance anyway!

Hummus is a combination of mashed chicpea, garbonzo or cece or all three- Ok they all are the same thing just called different depending on the country of origin for the recipe- So combine chicpea, tahini(ground sesame seed), lemon & olive oil and whammo hummus! In this episode I put Tribe’, Sabra, and Cedar through the paces with their roasted garlic flavored hummus-

See who wins and who loses!

Here is a little Wiki for you!

Many cuisine-related sources carry forward a folklore which describes hummus as one of the oldest known prepared foods with a long history in the Middle East which stretches back to antiquity, but its historical origins are unknown. The historical enigma is such that the origins of hummus-bi-tahini could be much more recent than is widely believed. One of the earliest verifiable descriptions of hummus comes from 18th-century Damascus and the same source claims it was unknown elsewhere.

Meanwhile some cookbooks repeat the legend that hummus was first prepared in the 12th century by Saladin. Sources such as Cooking in Ancient Civilizations by Cathy K. Kaufman carry speculative recipes for an ancient Egyptian hummus, substituting vinegar for lemon juice, but acknowledge we do not know how the Egyptians ate their chick-peas. Similarly, no recipe for hummus has been identified among the many books on cooking surviving from ancient Rome.

Charles Perry, co-author of Medieval Arab Cookery notes that owing to hummus bi tahina being an everyday staple, and because of the lack of Arab recipe books published between the 14th and 20th centuries, no recipes documenting this food’s early ingredients have been found. He says the nearest medieval example recorded in a 13th century Arab cookbook, Kitab Wasf al-Atima al-Mutada is Hummus kasa, which substitutes vinegar for lemon, includes extra herbs and adds walnuts, hazelnuts, almonds and pistachios.
Posted by Thanks for Reading! at 10:18 AM