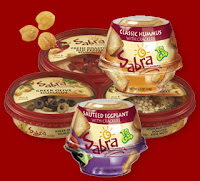 I think I started my "anti" brand phase as a Nirvana fan in high school. But let's face, it, who doesn't want quality out of the products they consume? (typed from my custom Apple set up).
I don't remember the exact moment I discovered Sabra hummus, but I fell in love quickly. As most who are involved with music know, hummus is a beloved backstage rider item. It's the best thing on tour: a vegan/vegetarian healthy spread that pairs with a variety of items ie pita, veggies, fruit, on sandwiches, etc. Everyone is happy, even the drinkers on the bus who eat it with chips in the morning to cure their hangover. It's such an important item, that when I tour managed The Dresden Dolls, we specified the brand on our rider. However, one tub of Sabra hummus, was never enough for the 10 or so in our band and crew, and thus we would always advance two with the venue. Nothing is more of a bummer than rolling into a venue, starving & exhausted and getting stuck with an off brand hummus, it changes the entire meal. So much so, that I also specified brands of hummus that we DIDN'T want. No need to list them here as I don't believe in putting negativity out into cyberspace, but you get the idea about our love for Sabra.
I am now quasi settled in Brooklyn, and am off the road. However, Sabra is still a regular item in my fridge, much to the delight of my roommates and friends. People love it! They always call it "that kind" of hummus. ie "That kind of hummus is the best." Duh, I'm a hummus expert. Don't get me wrong, homemade hummus and hummus from my local falafel shop is amazing, but I'm a busy gal and there's actually a (semi) point to this.
Today, while going through my RSS feeder, the Obama Foodorama blog (which is awesome) linked to Sabra hummus statues of Hillary and Obama (!) (as @indecisean pointed out, there was a McCain one, but as OF pointed out 'who cares?':)). Obvi, I had to tweet this very exciting combination of two things I love to @ least my roommate and office-mates (who are basically my roommates too) who know/understand my obsession with Sabra.
I came home from yoga to find that @Sabra had re-tweeted my post, which was rad because it meant Sabra was on Twitter. It looks like @Sabra is in its early phases, but I love it already. @Sabra has already made a Seinfeld reference, toured Boston colleges, & a provided a place to declare one's love for jalapeno or indecisiveness on whether combining caramelized onions and hummus is a good thing. Maybe someone will post about Sabra falafel and put me over the edge to buy it. I've always seen it, but never tried it for some reason.
Yes, Sabra is distributed by PepsiCo. But do we love MGMT's Oracular Spectacular any less because it's distributed by Sony? If you do, that's lame.
Anyway, thank you @Sabra for finding a hummus lover like me and communicating so directly. What's next? Sabra pita? Who knows, but whether it's Orwellian or not (which my mom pointed out to me tonight), I'm sure @Sabra will let me know.
Love,
Heavily Engaged Dipper Em Wizzle
Posted by Thanks for Reading! at 7:59 AM