Refrigerated and Frozen Foods: Food Plants of the Year 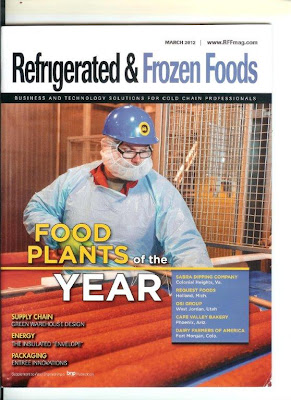 “Behind every successful company is a good food factory.”

Isn’t that how the saying goes?

Here’s an interesting twist on time and a contrast of old and new. Sabra Dipping Co. has a two-year-old factory in a town (Colonial Heights, Va.) that traces its history back to America’s revolutionary war. Now consider that the factory’s primary product (hummus) is a Mediterranean staple dating back to the 13th century B.C.

Sabra’s new $61 million plant is a sign of the times. Consumer interest in exotic and healthier foods has fueled strong, year-over-year sales gains in refrigerated hummus and other Mediterranean dips and spreads.

Those sales and consumer trends attracted Israel’s Strauss Group to look at the market. In 2005, it partnered with Yehuda Pearl, founder of Sabra Blue & White Foods, a Kosher hummus processor in Queens, N.Y. Continued growth then led PepsiCo and its Frito-Lay subsidiary to join Strauss in 2008 as equal 50-50 partners in Sabra.

Speaking of percentages, Sabra boasted a 10.4 percent dollar share of a an estimated $165 million refrigerated dipsmarket in 2005. Today, Sabra says it controls an even larger dollar share (53.2 percent) of a $419 million category that grew 11.2 percent from the previous year, according to SymphonyIRI data.

Of course, it takes a big factory to supply a category that’s posting double-digit annual growth.

“When Sabra reached about $70 million in annual sales, consumer insights (officials) said we should prepare for continued growth,” says Meiky Tollman, Sabra’s chief of operations. “In 2008, all indicators suggested we build a factory that could serve a business that is four or five times larger and beyond.”

Tollman said it was that same spring (while joining PepsiCo) that Sabra drew up plans with the support of Dennis Group Engineering for a new plant to more than double the capacity of its Astoria, N.Y., site (now closed). The company broke ground in 2009 in Colonial Heights and opened the facility the following April.

For the record, Sabra says its new 115,000-square-foot facility is the world’s largest refrigerated hummus operation (including a 40,000-square-foot finished goods DC). Colonial Heights also is one of the few temperature-controlled food plants to earn LEED Silver certification (Leadership in Energy and Environmental Design) from the U.S. Green Building Council.

The facility has eight production lines to process and pack approximately 100 SKUs of refrigerated hummus. It employs 380 people and ships to more than 40,000 U.S. and Canadian retail outlets.

Although Sabra’s headquarters remain in White Plains, N.Y., the company is building a separate 20,000-square-foot “Center of Excellence” in Colonial Heights, Va., to house company headquarters functions for operations, supply chain, R&D, a pilot plant and additional offices. Officials say they expect by 2013 to complete the adjacent facility.

While work continues outside, Tollman focuses his attention inside the plant walls. After all, this March still represents just 21 months of operation.

“In moving to Virginia, we left an older, manual operation for a modern, high-quality factory,” notes Tollman. “The challenge was to increase capacities and food safety measures while keeping our kitchen-fresh taste, flavor, texture and appearance.”

By all accounts, Sabra’s first full year in Colonial Heights was a success. Compared to Astoria, Tollman says the new facility gave Sabra as much as 200-percent capacity increase.

“Our biggest success involves people,” says Allen. “We managed to hire a team that is dedicated and passionate about making great product. We created an atmosphere where everyone feels comfortable and knows that it is our future that we are building here – together.”

Of course there aren’t many opportunities to start a new employee culture or food plant. When it came to operations, Brent Fowler, Sabra’s operations director, cannot disclose many details.

“We have a clean-in-place (CIP) system that is robust enough to handle the most difficult food safety issues,” he says. “Our product is never exposed to the manufacturing environment, and human hands never touch finished products from the lines until they are in hermetically sealed packaging.”

Mommsen says the plant has a custom, four-cycle sanitation system from the chickpea cookers to the finished product filling equipment. Integrated CIP controls along every step of the process clean and sanitize. It also includes CIP of all tanks located on site.

How about another hands-free operation? Mommsen says one of several 2012 automation projects will involve packaging. Sabra will install and integrate more end-of-line machinery to eliminate manual product handling and case packing.

“Behind every strong brand is a strong plant,” concludes Tollman. “We plan to continue our growth in the marketplace and now have the plant to do so.”